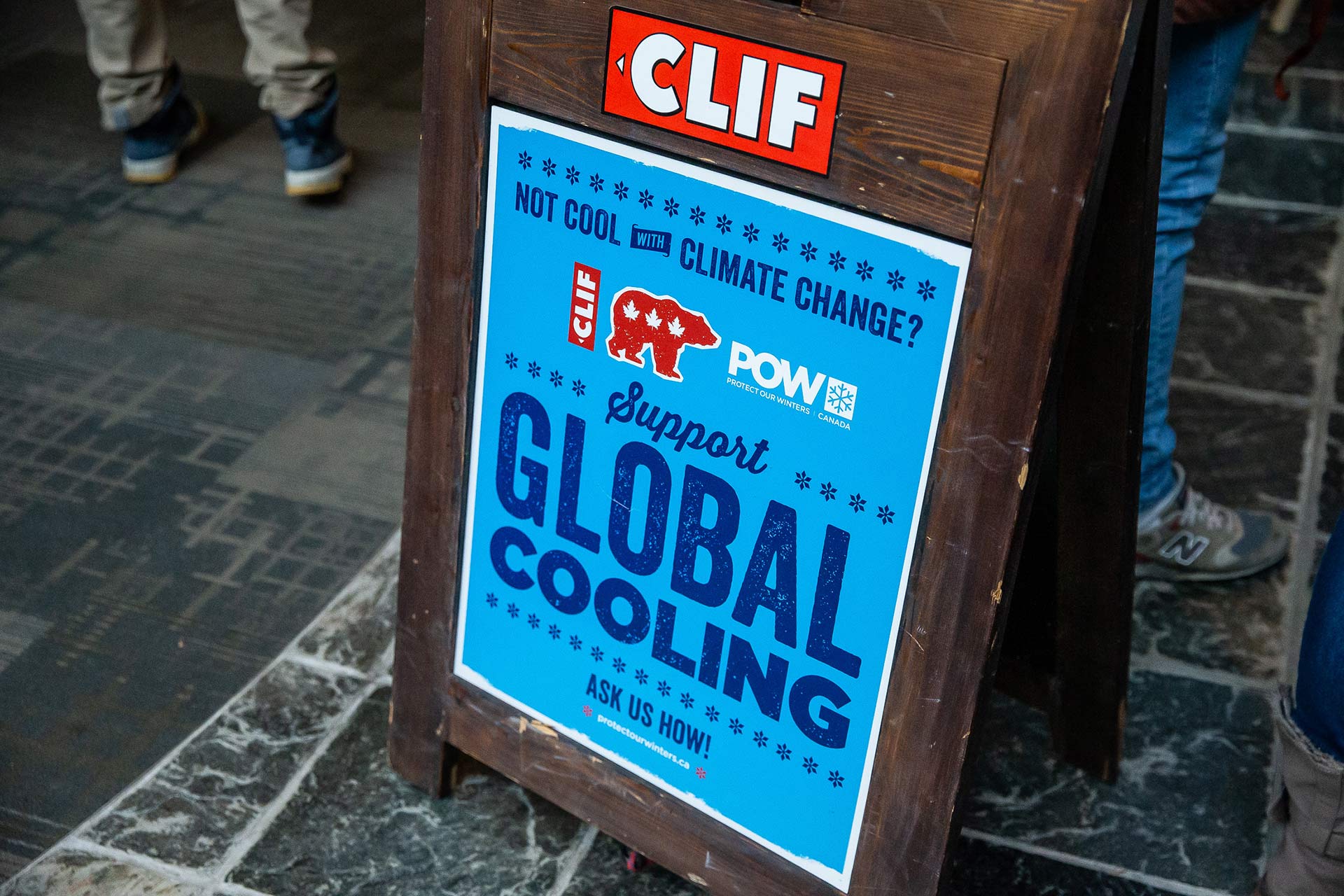 Olympian Kelsey Serwa stands at the center of the gym in Vancouver’s University Hill Secondary School, in front of 750 high school kids that hang on her every word. A screen behind flicks through winter images of deep backcountry powder and resort slopes dotted with the ecstatic faces of skiers and snowboarders. Serwa won a gold medal in women’s ski cross in the 2018 Olympics— but that’s not what her presentation is about.

It’s her talk on climate change that has the teenagers so enthralled you can hear a pin drop in the cavernous gymnasium.

Serwa is an ambassador for Protect Our Winters (POW) Canada, newly-launched in partnership with CLIF Bar as the northern arm of the rapidly-growing Protect Our Winters that was founded in the U.S. in 2007 by pro snowboarder Jeremy Jones, with an aim to unite the outdoor community around addressing climate change. Serwa’s presentation is part of POW Canada’s Hot Planet Cool Athletes program that brings top-tier athletes into schools to educate students about the issue. She’s gone through the science, current state of affairs, and individual actions for reducing impact.

When she gets to POW’s focus on advocacy for large-scale, systemic policy solutions to the problem, the students of University Hill transform from riveted to fired up. One young teenager stands up and, addressing his ranks of peers, gives an impassioned, goosebumps-inducing speech on the importance of showing up for a climate march scheduled for the next day in downtown Vancouver. The room erupts in energy.

POW ambassadors and staff joined hundreds of students for the youth-led march the following morning on May 3, organized in concert with similar events around the world as part of the Climate Strike movement. “That was the first time I’ve been part of something like that,” said POW Canada board chair Mike Douglas, who had stood alongside Serwa in the University Hill gym and been left breathless by the young man’s impromptu sermon. “For me, working on climate can sometimes be quite depressing and difficult. But when you see the youth rising, with their passion and their refusal to give up – that lifts me up and makes me want to keep pushing on.”

This is why the Hot Planet Cool Athletes program is so strategic. It’s reached 3,000 teenagers this year alone, with a goal to reach at least 10,000 per year going forward. The focus on high schools is strategic too, to mobilize the upcoming youth that will be of age to vote in the next election cycle. And since POW is all about creating a grassroots movement of voices to influence the policies that can bring the landscape-level action needed to address climate change, those voting youth are, on many levels, the future of this earth.

“What’s at stake is the future of our planet being habitable. Every scientific report brings a new sense of urgency,” said Douglas. “As a father of a couple school-aged kids, that concerns me. The future of young people concerns me. This question of: will they be able to have a life like I had?”

Douglas is widely known as the “Godfather of Freeskiing” with a wildly successful career ranging from professional skiing and ski shape innovation to creating Salomon Freeski TV through his media company Switchback Entertainment. He’d been involved with POW in the U.S. for a few years, and as the need for a Canadian arm became glaringly apparent, he took up the charge as part of a team of volunteers that included such big names in the industry as pro skier Greg Hill and pro snowboarder Marie-France Roy, along with the environmental and business expertise of Dave Erb, now executive director.

POW Canada officially launched in October 2018. Its membership already numbers in the thousands, with a tangible energy behind it—like the stoke vibrating off the 1,400 people at Whistler Ski and Snowboard Festival’s legendary Intersection film competition on April 13, hosted this year for the first time by CLIF Bar and POW Canada.

On center stage, under the four screens in the 360-degree ballroom of the Whistler Conference Center, the emcee announced to the jazzed crowd the latest requirement for films entered in Intersection: in addition to footage required to come from in-bounds and within 100 km of Whistler Blackcomb, a POW sticker must appear at some point in each 5-7-minute entry.

It was a brilliant move in the strategy to make climate change advocacy cool: incorporate it into one of the hippest film events in snowsports. Outside in the lobby, POW ambassadors stationed themselves with stickers, posters, and sign-up sheets to harness the enthusiasm.

“Some people feel disempowered in the climate change conversation because it can be so overwhelming,” said pro skier Anna Segal, POW ambassador and Intersection film judge. “This gives people who care an outlet to take some kind of action, to have a voice and participate. Especially when it’s right in front of them at Intersection, we can capture all those people who’ve been thinking, ‘I’ve been meaning to get involved!’”

As for the future, POW Canada is expanding its grassroots membership and starting up chapters across the country in strategic locations for political influence, creating a web of highly motivated citizens to call for policies at the highest level that address climate change—all activated from the community level.

“For people like me who’ve understood climate change for 25 years now, we always assumed that the government would take care of it and put in place the goals we’d need to achieve,” said Douglas. “But at a certain point you realize that if it’s going to happen, we have to do it ourselves. For an organization like POW that’s only as strong as our membership, we need to have support to be effective. That’s why it’s so cool to see CLIF Bar coming in as a founding partner. That support rises, and we all have a bigger voice.”